Cycling trip from Bolzano to Treviso.

Cycling trip from Bolzano to Treviso. 346km by bike, 15km by train.
The idea started of having a bicycle trip started when we decided to move from Bolzano to Macerata. I wasn’t sure if I wanted to cycle the whole way or just to Venice. The possible routes were many and it was hard to choose.  Three main routes existed though and in the beginning I only considered two of them:
1.  Bolzano, Verona, Vicenza, Padova, Venezia.
2.  Bolzano, Trento, Valsugana valley, Bassano del Grappa, Treviso, Venice.
and the third option, which I only discovered a few weeks prior to departure
3. Bolzano, Bressanone, Brunico, Dobbiaco, Cortina, Belluno, Valdobbiadine, Treviso, Venice: total 391km.


As soon as I read of the third option, it convinced me. It would be the more demanding of the 3 and also longer. But the idea to visit areas that I’d never seen before, up amongst the mountains, was thrilling!
I had bought a MTB, Ghost SE1200, in the spring and had spent the spring and summer training somewhat, but I wouldn’t say I was in hard training or anything. I used to go to Lago di Monticolo, which is about 18km from Bolzano, on a uphill (so 36km round trip) about once a week – 1 every second week, and also did some longer trips to Bressanone (84km round trip) and to Lago di Garda (125km there and 45km back) a few times.  I’d never done any longer trips where I would ride several days consecutively.
I found all the information (which wasn’t very detailed, but it was enough) online on http://www.italia-radreisen.it/ http://www.girolibero.it in English, bought a map(also not particularly detailed 1:250,000), bags for the bike and I was off! Thanks to the information I had gathered earlier I was able to make a rough plan on how far to go each day, dividing the route into 9 parts of 30-40km intervals, making it possible to do more or less, depending on how I felt.


My good friend Giorgio had come up to Bolzano for my birthday (big 30th) the Friday before. I told him about my crazy plan and he decided to come along for the first leg of the trip. We went slowly preserving energy for the days to come. Travel conditions: There’s a really nice bicycle path going the whole way which is in perfect condition. It goes along the old railway line, along the Isarco river, through the Scilliar valley leading north.  The Scilliar mountains are to your right 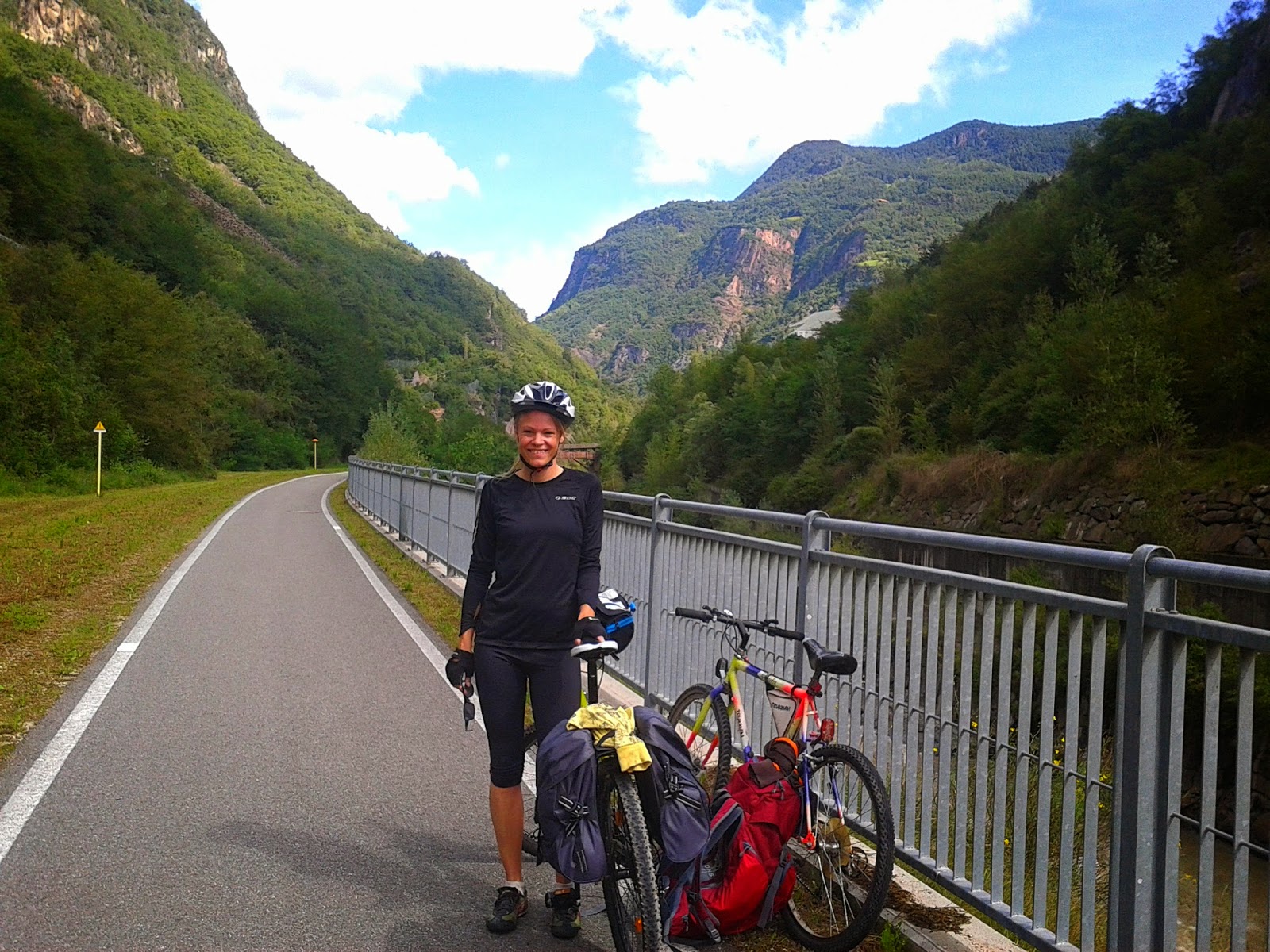 (east)  and Sarentino to your left (west). You pass by a few little villages, such as Chiusa, and there are also several “Bici-grill” along the way, restaurants/snack bars especially for cyclists needing a little break. Sleeping:  We stayed at the youth hostel in the very center of Bressanone. It was definitely one of the best I’ve stayed in. Clean, very large rooms with just 3 beds in each one, friendly staff, very central (part of the churches headquarters) and fair price (27 euros per person).


2/9: Bressanone – Brunico 34km (15km train, 19 by bike), + 298m.
I had read that this part of the journey wasn’t a nice place to ride your bike and I’d
previously been suggested to take the train. Although, the same morning I met a cyclist at the hostel who said it was doable although he still suggested taking the train. Once on the train I met two more cyclists who convinced me to get off a few stations further up and continue by bike... So that’s what I did.
Travel conditions: alternatively dirt roads and bitumen.
2/9: Brunico – Dobbiaco 30km, +403m

This was the true turning point in my travel. I was a bit nervous about going on, knowing that there weren’t going to be any more trains in case of injury (or simply changing my mind) and not knowing what to expect.  Travel conditions: From Brunico you go along the river, upstream
(which also means up-hill) passing little villages such as Valdora di sotto, Valdora di mezzo e Valdora di sopra (literally meaning “at the bottom” “in the middle” and “at the top”. For the first 10-12km you’re on a dirt path in the beginning and a bit more immersed in the forest surrounding the river.  The last part is a bitumen bike path/secondary small roads.
The scenery is beautiful having green hills close to the path and high dolomite mountains in the background. I was one of the only cyclists on the second part of this leg.
2/9: Dobbiaco – Landro  15km

I really don’t know why I didn’t stop and spend the night in Dobbiaco (1,241m), as a friend of mine from there had suggested where to stay, but I felt energetic (don’t ask me how that’s possible) and wanted to continue. At Landro, which is a site overlooking the Tre Cime di Lavaredo (2999m), one of the most spectacular part of the dolomites, I stopped at a huge hotel along the road to ask for something to eat. The old lady informed me that the kitchen had closed (I was probably only about 20 years late). After seeing the disappointment in my eyes, she offered to make me some pasta, which was much appreciated. I was telling her about how far I’d come and she asked if I wanted to stay the night. She said that she has a “simple” attic where I could stay cheaply. She couldn’t give me a normal room, as it was a 5 star hotel. The attic was fine, a 3 bedroom room with a private bathroom. She said to come down later on and we could have a chat. That said, around dinner time, I came back down and she had prepared an onion soup and some bread. Speaking to me (and herself) about all kinds of people I could impossibly know.
After a while I realized she had become quiet and in fact fallen asleep right in front of me!
The next morning she had made me breakfast with cakes, bread, and yoghurt and when I went to pay, she said she didn’t want a dime, but that I had to call her when I arrived, as she’d be worrying about me otherwise.
Travel conditions:  A dirt bicycle path the whole way, a few cyclists here and there, passing absolutely amazing scenery that can’t even be described. Sometimes I just had to stop and soak it all in. Only when you are so completely immersed in nature do you realize how small you are.

Travel conditions: The dirt bike path continues. You continue having a view of monte Cristallo (3221m). Here I met up with several large groups of mountain biking tours. I cycled with a group from Germany for a while, practicing my German. I was happy about how it went actually. But when they decided to stop for a cappuccino break for the 2nd time I decided to continue without them. I was liking the cycling by myself anyway.  The landscape leads you through a forest with mountains on either side. It was here that I met Gerta. A big stubborn cow, standing in the middle of the path, not budging, looking me dead in the eye. But she was calm, and reminded me not to be in a hurry. We exchanged a mutual gaze and I spoke to her calmly and finally, she moved. This is when, I realized I would call my bicyle Gerta: strong and stubborn.
Cortina is well…magical. The landscape is breathtaking. Sadly, I’m not the only one that thinks so, so it was very full of tourists. I stopped for lunch and then continued.
3/9: – Calalzo: 40km
Travel conditions:  This is a bitumen bike path, with some parts becoming dirt paths, passing through S.Vito di Cadore, Vodo di Cadore and Valle di Cadore. The views of the Marmarole (2932m), and later on of Monte Antelao (3263m) and Monte Rite (2181m). I was enjoying this downhill ride and it didn’t take long also considering the good condition of the path.
3/9: Calalzo – Belluno: 40km
Travel conditions:
Accomodation: I got info at the tourist information and gave me the name of 3 B&Bs that all had similar prices for single rooms: between 28-32 euro. I chose the most central one not bothering to look around too much.

4/9: Belluno – Valdobbiadine: 75km
Travel conditions:  Secondary roads leading back up into the mountains. A 171m rather steep climb that felt like it was never ending.


At the tourist information in Belluno I was given a bike map “Lunga via delle Dolomiti”. That sounded lovely I thought and, despite the route was 20km longer, I decided to take this way to Valdobbiadine. I wish I had studied the map more carefully though, as what I didn’t realize was that instead of a relaxing 60km downhill ride, I would be going on roads going back up into the mountains, taking me on a further 171m steep climb. At this point of the travel I was getting tired and had really looked forward to the downhill. The path wasn’t a bike path at all, but secondary roads with hardly any traffic. Although there were some points when climbing that darn mountain where visibility was low. The so-called “bike path” finished in Feltre and from there I still had to get to Valdobbiadine, which was about 15km away. That last part of the trip wasn’t much fun, on a highly trafficked road. I put on my most flourescent tops, tied another one around my bags for visibility. It also started raining so it wasn’t exactly the best part of the trip. 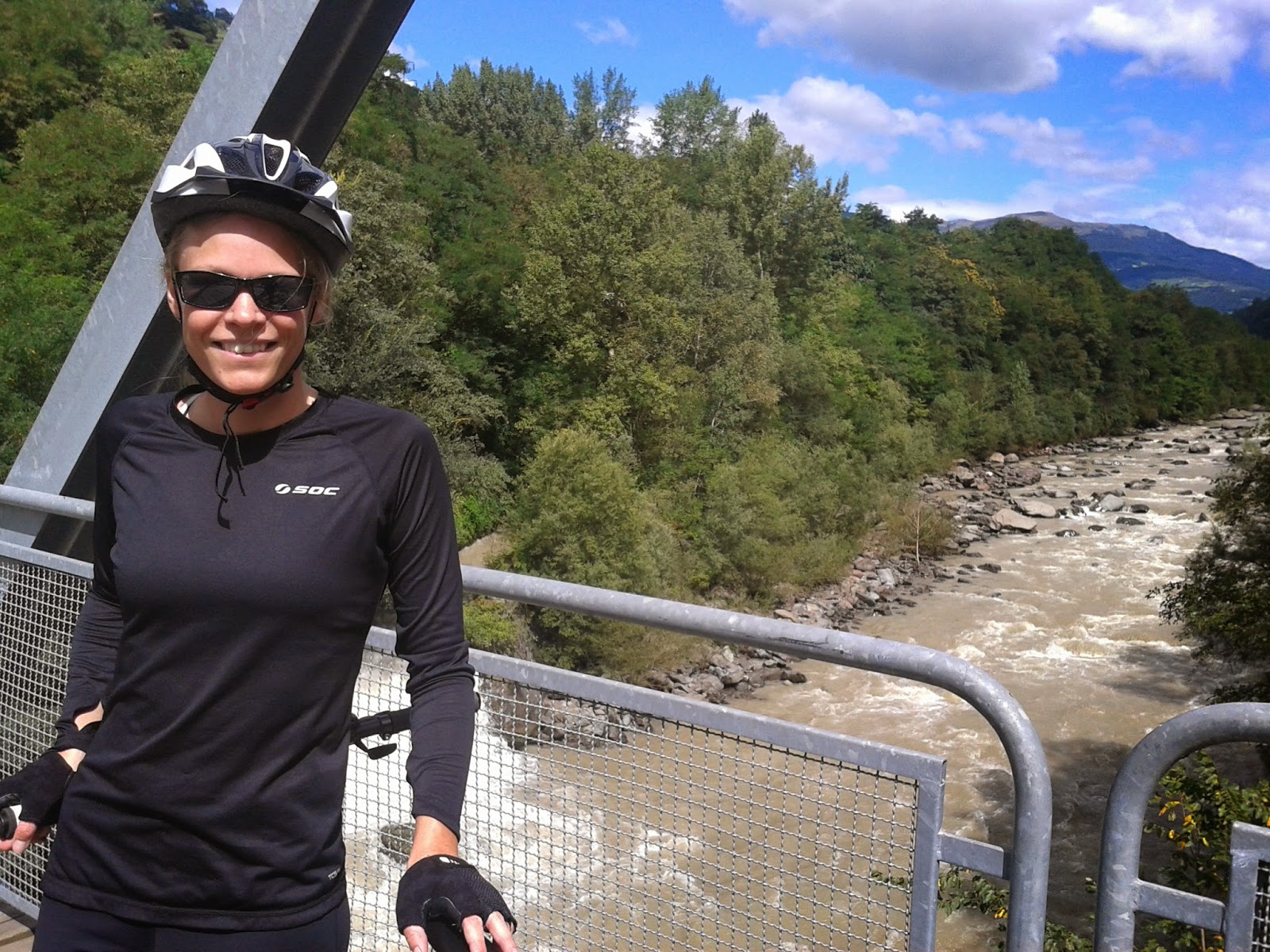 Once in Valdobbiadine, the district of Prosecco, I stopped at an Agriturismo asking if they had a free room. It seemed like all the German tourists had booked up all the rooms in the area. I was exhausted, wet and hungry, so this wasn’t good news. Meanwhile they offered me some Prosecco which made everything feel better again. One glass after the other, trying all the different types, and I realized I’d been there chatting to these friendly people for almost 2 hours. The landlady called around and found a room for me at a closeby small B&B, where, obviously, they offered me more Prosecco. The young girl and her boyfriend took me to dinner at a delicious restaurant and of course, we had more Prosecco. The B&B and winery was really nice and I thoroughly enjoyed sleeping there.  Price: 30 euros. They also talked about the possibility of modernizing their winery next year and the possibility of working together for that project. 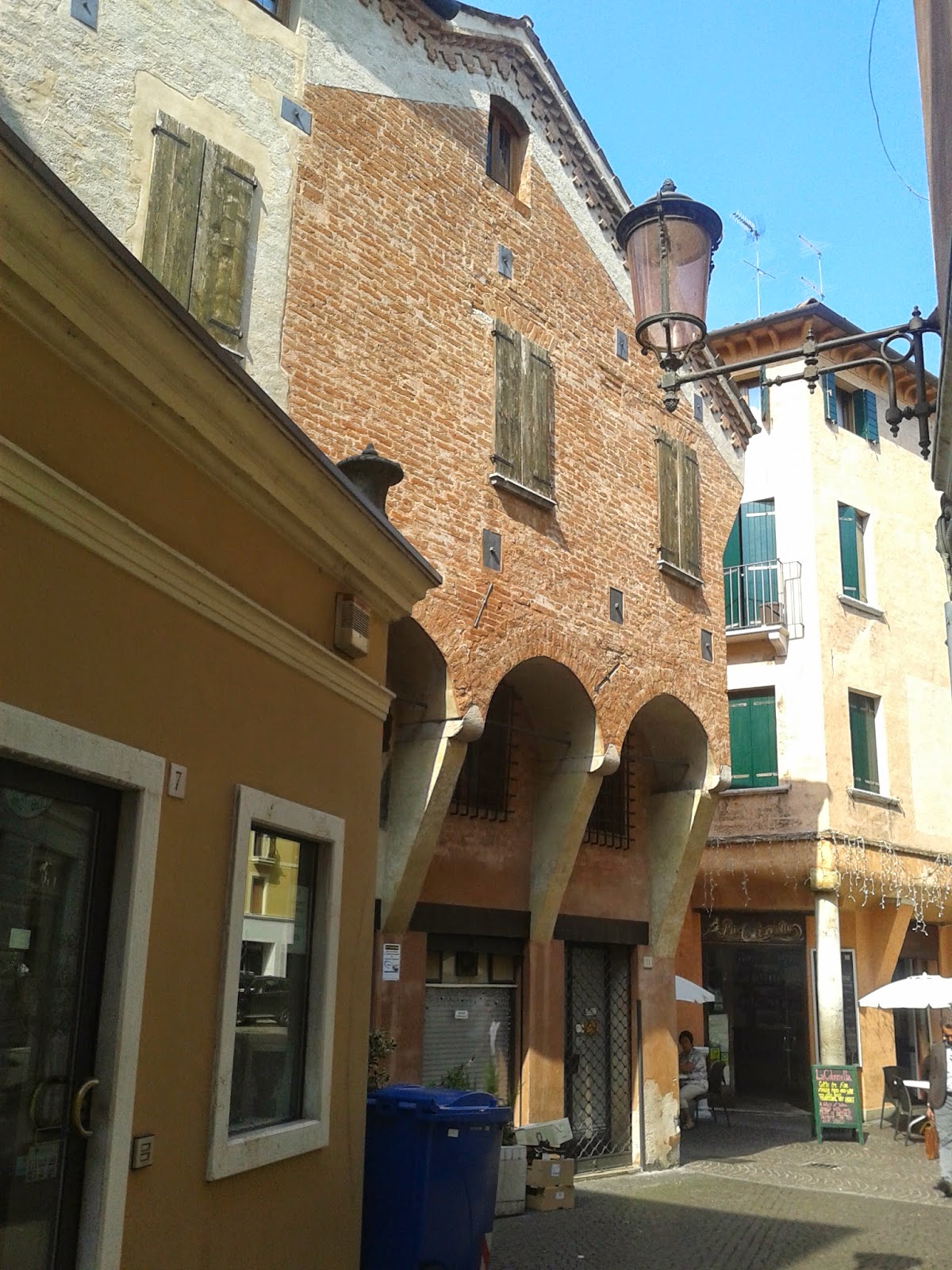 Travel conditions:  Small local roads. Relatively flat.
I got thorough information from the people at the B&B about the first leg of this trip, and the first part went smoothly. After that I got lost and it felt like I was riding around in circles. I asked for directions several times but nobody seemed to know the way to Treviso, despite they didn’t live very far away. I finally got there though and in the end the trip was quite nice as it took me on tiny local roads through farms and wineyards.
Treviso is lovely. It’s a small city with a beautiful historical center with canals. I wandered around the city for several hours, enjoying a nice lunch. And there, overlooking a canal, I suddenly realized that my adventure would stop here. 346km of cycling. I slowly walked to the train station, bought myself and Gerta (my bicyle) a train ticket, and took the train to Macerata. 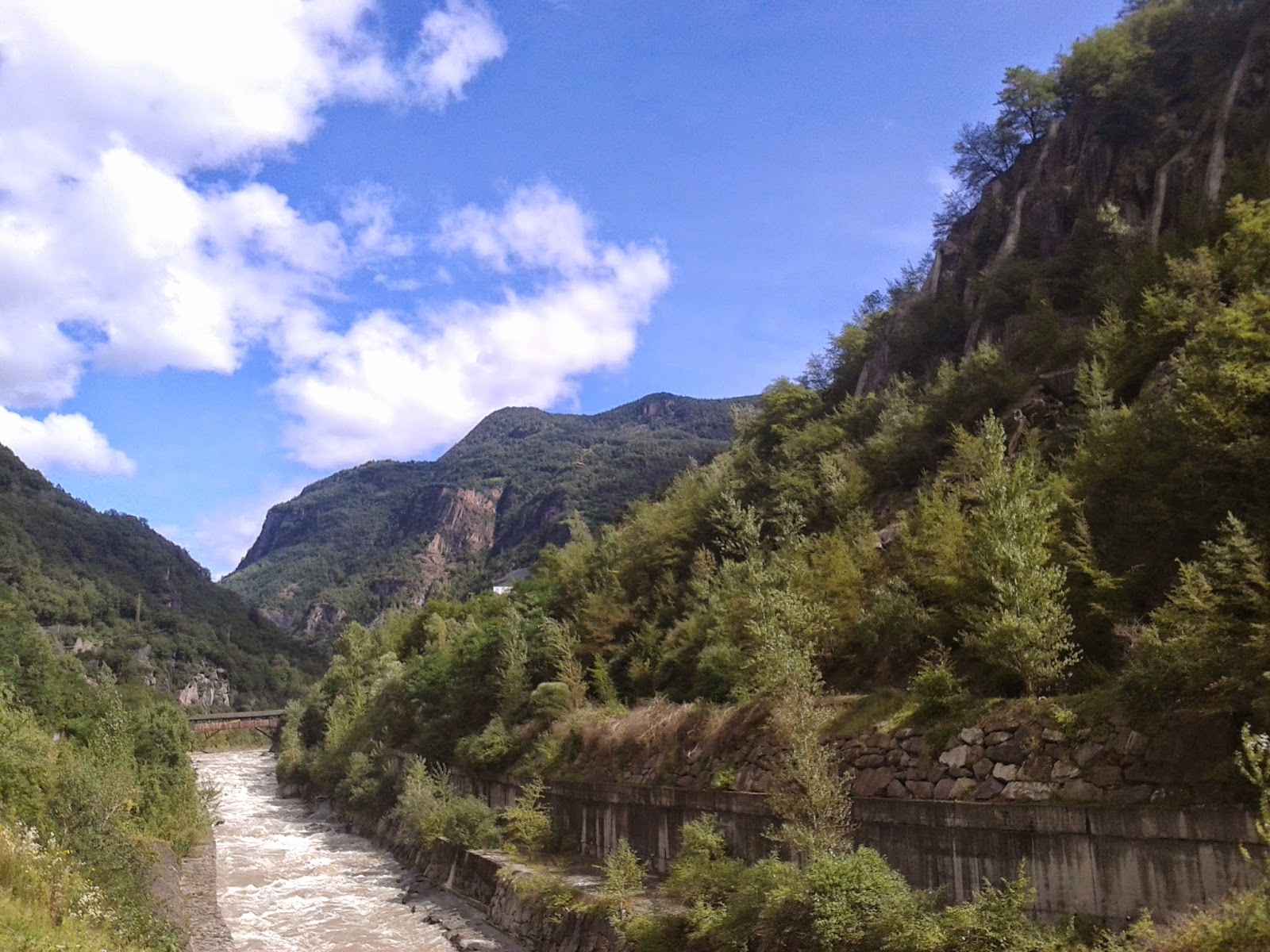 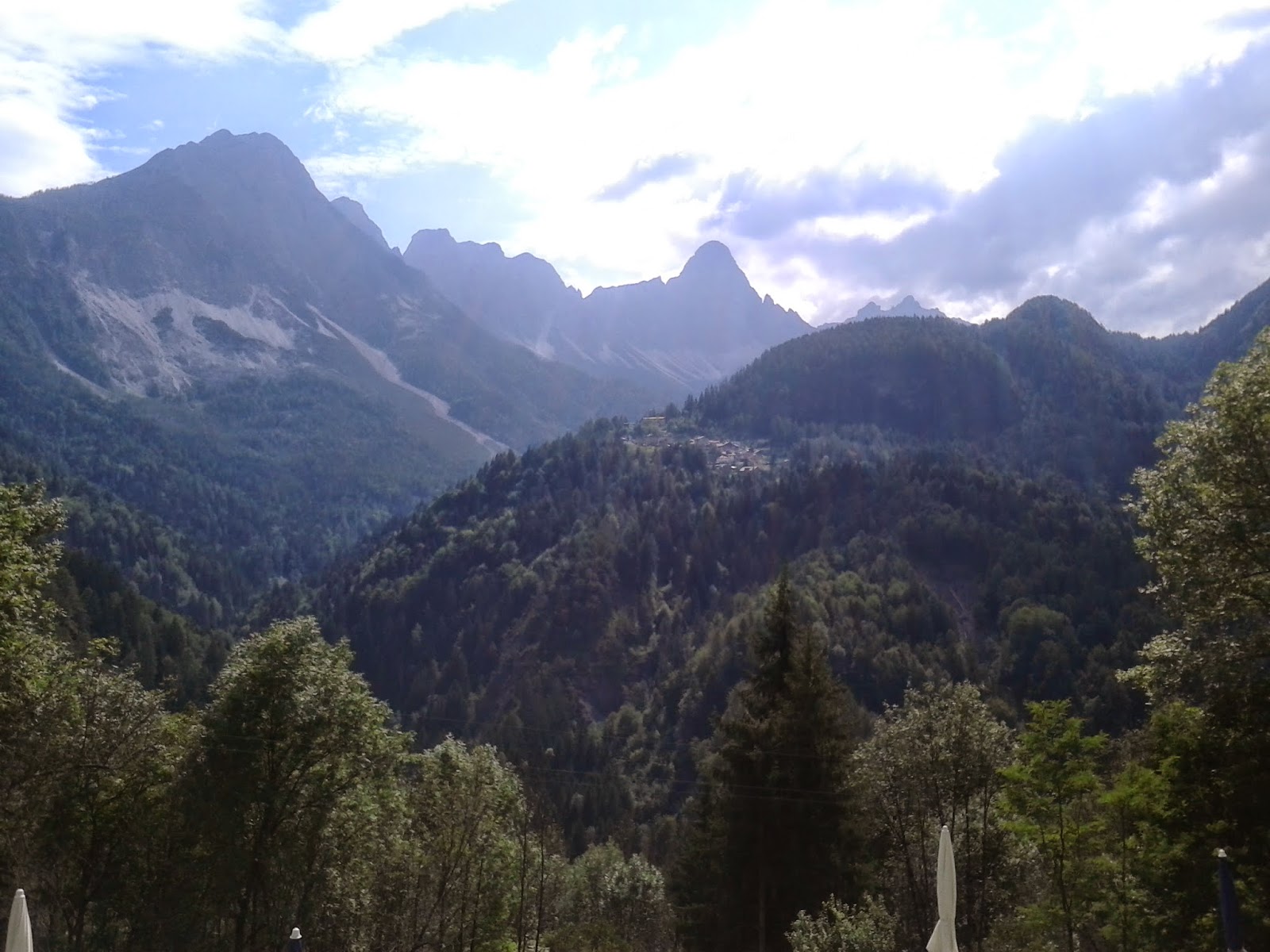 Posted by Pulmonate at 1:09 PM